The Not So Big House: A Blueprint for the Way We Really Live 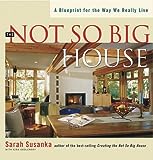 This best-seller was met with an extraordinary response when it was published in 1998. In it, visionary architect Sarah Susanka embraced the notion of smaller, simpler shelters that better meet the needs of the way we live today. The book created a groundswell of interest among homeowners, architects, and builders. More than 200 photographs bring the spirit of the “Not So Big” house alive.When describing a favorite room in the house, do you find yourself using terms such as “expansive,” “formal

This unique book of thirty-six spectacular houses and gardensâ€”whose owners come from the worlds of fashion, music, art, and societyâ€”draws not only on stories that have appeared in the pages of Vogue and Vogue Living over the past two decades but also on images that have never before been published. Vogue Living: Houses, Gardens, People takes you to these style-makersâ€™ private realms around the world, captured by such celebrated photographers as Miles Aldridge, Cecil Beaton, Jonathan Becker

6 Responses to "The Not So Big House: A Blueprint for the Way We Really Live Reviews"